← more from
ATA Records
Get fresh music recommendations delivered to your inbox every Friday.
We've updated our Terms of Use. You can review the changes here. 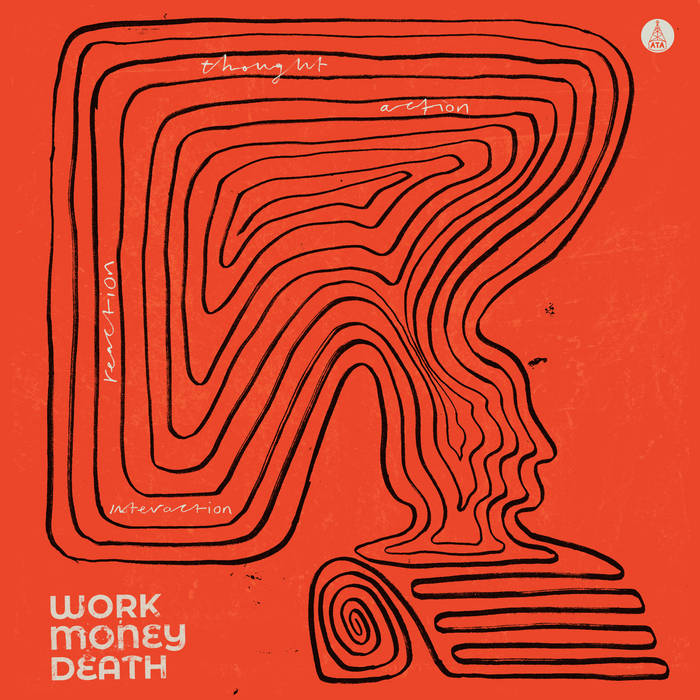 Tom Funk One of my favourite releases of the year! Spiritual magical wonderful !

Jimmy Jazz Sublime album! I love everything ATA releases and this is just another exceptional album! Hats off to you ATA!

ibr One of the years best LPs. A spiritual jazz beauty. Favorite track: Freedom As A Heartfelt Song.

“What a delightful, excitingly beautiful album. From “At once familiar “ all the way through to “meditation on healing vibration” everything song feels and sounds sonically glorious. A modern day classic”
-Nightmares On Wax

Taking a short sabbatical from their journey into the spiritual stratosphere and beyond, Work Money Death landed on terra firma just long enough to record a follow up to the critically acclaimed “The Space In Which The Uncontrollable Unknown Resides Can Be The Place From Which Creation Arises”. The new album “Thought, Action, Reaction, Interaction” explores many of the meditative motifs that mould this unique group in their quest for the perfect sound and space. Those who are familiar with Work Money Death will know their output is as much an adventure for the listener as it was for the musicians.

Recorded, as always, at ATA studios, a temple purpose built for the worship of all things analogue, “Thought, Action, Reaction, Interactions” is a salute to the now sadly deceased master of the spiritual sound Pharoah Sanders, and in particular the spontaneity of his recording process.

Each of the four tracks on “Thought, Action, Reaction, Interaction” were recorded in one take with no rehearsal and while the players may have known where they were starting off none of them were sure where they would end. As much as it is entertainment, and have no doubt this LP is an unctuous, spirit-smoothing joy from beginning to end, this is an experiment of making music in the moment. Spontaneous and spiritual in its truest sense, “Thought, Action, Reaction, Interaction” is a work of innovation and unsurpassed beauty.

“At Once Familiar” is a rising salute to the day, meditative, moving and fierce. An introduction to Burkill’s emotive style, at once sweeping and succinct. It fills a room, and your head, with a very real sound, rich in texture and spirit.

“Freedom As A Heartfelt Song” is buoyant with harp, the spirit of the Yorkshire Pharoah is never more to the fore. Visceral sax rides over and uplifting backing, symbiotic and pinioned with power and beauty. Think Sun Ra horns meets Don Ellis brass.

“Song Of Healing” drifts on a river of music, guided through the rapids with a heartbeat bass line. This is temple sombre, with Eastern flavours and an overarching calm. A communion of sound, a master class in the understatement and power of the slow note, deceptively light.

“Same As Before” is spoken word playing foil to the call and response of the brass, dancing alongside and against each other. Spiritual vibrations cement ethereal forms to substantive sounds. A prayer to change.”
Following in the same vein as previous Work Money Death releases, ATA studio boss Neil Innes conceived the album with tenor sax player Tony Burkill, a vehicle for the latter’s improvisational chops, bolstered by sterling personnel.

A stalwart of the Leeds music scene for the best part of three decades, Tony had maintained a low profile nationally, choosing to favour continued study and development on the instrument over attainment of success or recognition within the music industry.

As with the previous Work, Money, Death release (which was recorded in difficult conditions due to the Covid pandemic) the aim was to recreate a situation, in this case the impromptu and unrehearsed recording sessions of Sanders in the late 60’s and early 70’s, everything recorded in one take, creating a body of work that is a strong nod to a certain time and ethos but not a pastiche of it.

Work, Money Death are the band that backed Tony Burkill on his 2017 debut LP for ATA Records. Comprised of members of "The Sorcerers", "The Lewis Express" and Nat Birchall's band, they aim to produce longform, improvised pieces inspired by the work of Pharoah Sanders and Alice Coltrane. ... more

Bandcamp Daily  your guide to the world of Bandcamp

Sampa The Great joins the show to discuss her release, "As Above, So Below".